Shoddy, incomplete, fawning news coverage of screening tests is one of the most clearly established problems in health news coverage – something HealthNewsReview.org has revealed countless times over the past 15 years.

A public relations news release 22 days ago – from “a healthcare company whose mission is to detect cancer early” – touted study findings that the company says showed a test’s “ability to detect more than 50 types of cancer with a single blood draw could transform early cancer detection as a complement to existing screenings.”

There’s a great deal to unpack from that kind of claim, and I didn’t see any news coverage that did so. There may have been some that I didn’t see.

This week, The Guardian drew the ire of many observers on social media and on email listservs that I follow. 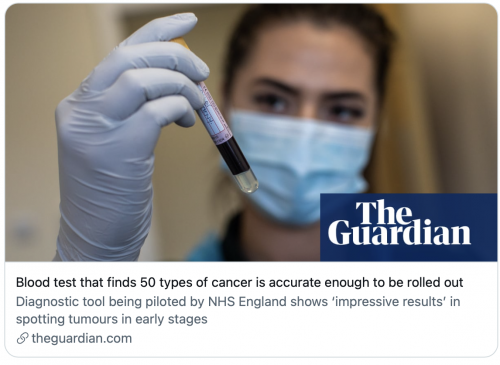 The Guardian reported: “It correctly identified when cancer was present in 51.5% of cases, across all stages of the disease, and wrongly detected cancer in only 0.5% of cases.”  But there was no analysis of what those numbers mean to patients.  The 51.5% sensitivity of the test – its ability to find cancer when cancer was present – means that almost half of patients with cancer who would have the test would not have their cancer detected in this way.  For patients with early cancers – the kind you hope to catch with an effective screening test – the sensitivity was much lower. The test had less than a 17% sensitivity rate for Stage 1 cancers, and a 40% sensitivity rate for Stage 2 cancers.  The researchers, in the journal article in which the study results were published, tried to downplay the relevance of the sensitivity statistics. But the news coverage that i saw skirted the entire sensitivity issue.

There was also no truly independent perspective presented in the story.  It read like a public relations message. It wasn’t difficult to find healthy skeptics even on social media.

Another British physician needed only one word to react to the news:

In the US, cancer specialist Dr. Kevin Knopf tweeted:

The Guardian wasn’t alone; you can find dozens of unquestioning stories online.

Let me clear about this:  As Dr. Bewley suggests, there are possible benefits but inevitable harms whenever mass screening is done.  Any journalist or news organization writing about screening tests needs to discuss these tradeoffs.

Because we’ve written so much about this issue, we have a primer that journalists and the general public should know about –

While I was looking up The Guardian’s story, I saw that they also published this story this week: 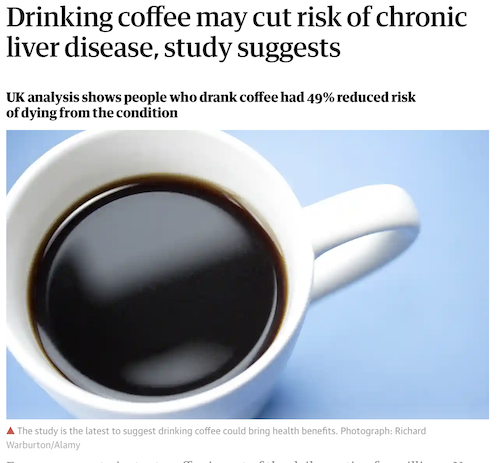 The Guardian allowed a study author to claim that this “confirms…that coffee drinking is protective against severe liver disease.”

Later, the story flip-flopped.  It took the Guardian 11 paragraphs – or 365 words – to disclose:

However, the study has limitations, including that it cannot prove that coffee itself reduces the risk of chronic liver disease, while participants were only quizzed about their coffee drinking habits at one point in time.

Confirms that coffee is protective?  Or cannot prove that coffee reduces the risk?  You can’t have it both ways.