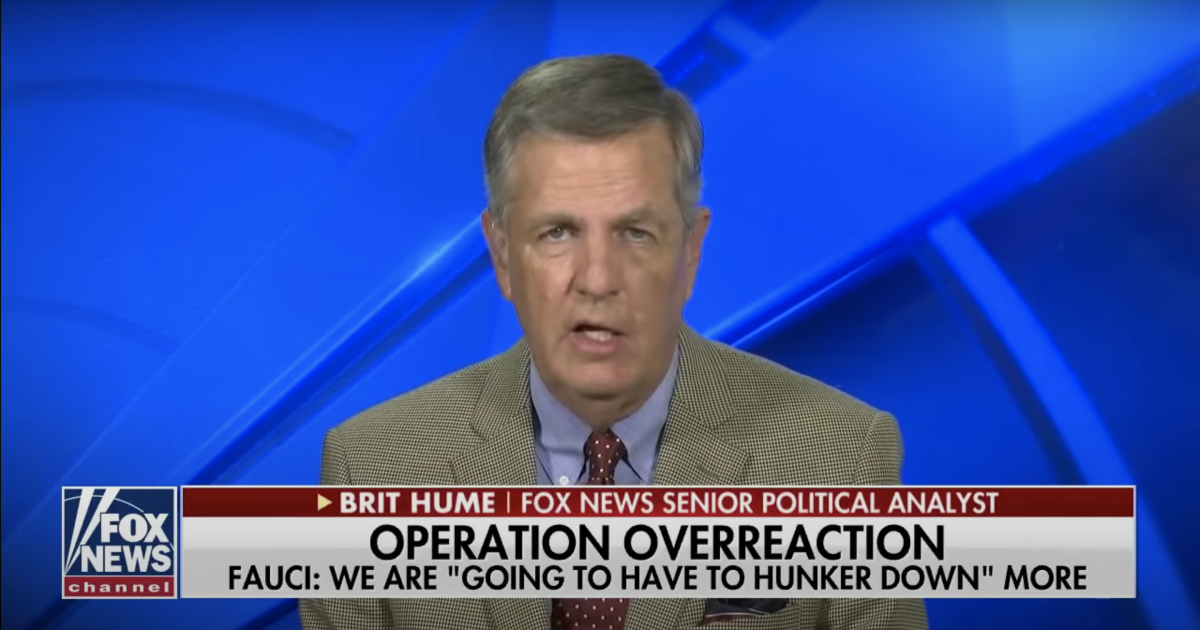 Fox News’s Brit Hume laid out two reasons why the argument for continuing stay-at-home orders across the country and federal social distancing guidelines was getting “weaker.”

Hume joined Martha MacCallum on her show The Story Tuesday and argued that the coronavirus was “not to be nearly as severe and dangerous as we thought.”

“Two things Martha,” Hume said. “First, the collateral damage from it is extraordinary. … The damage to our medical, our, our healthcare system, it seems to me, is something we really have to take into account here. It’s very serious.”

He continued: “We are saddling our country and our, and our future generations with debt on a scale that was already high. Now it is far, far worse. Not to mention the toll on businesses, which won’t reopen, and so on. The unemployment. The consequences for children of being locked up at home and not being able to go to school with their friends and be outside. The mental health issues that arise from that, the domestic violence. … That’s part of it, the damage from it.”

He said the second reason was the coronavirus “overwhelmingly affects elderly people and those with serious underlying medical conditions.”

“Everyone else is much less vulnerable, down to children, who seem almost totally invulnerable, to catching the disease,” he said, arguing that this “can be addressed” by quarantining the elderly.

“I think there’s reason to believe that this disease turned out, outside of certain populations, not to be nearly as severe and dangerous as we thought, and certainly the death rates I think will end up reflecting that,” he said.

Read More:  Jillian Michaels says these 11 fat loss tips will help you lose weight and keep it off