Forty per cent of staff at a hospital in Weston-super-Mare closed to new admissions because of a spike in Covid-19 patients have symptoms of the infection, it has been claimed.

A memo leaked to a local newspaper revealed Weston General Hospital, which has around 2,000 staff, warned of a high rate of coronavirus cases among medics.

The trust that runs the hospital has yet to deny the claims, and admitted last night there is an ’emerging picture’ of staff with no symptoms testing positive for Covid-19.

These silent carriers of the virus can unknowingly spread the virus to other people, with scientists previously finding up to half of cases are caused by asymptomatic spread.

The hospital suddenly stopped accepting new admissions on Monday, including to A&E, due to a ‘high number of Covid-19 patients’.

But causes of the outbreak have been a mystery, with locals blaming tourists crowding the beaches over the past two weeks. 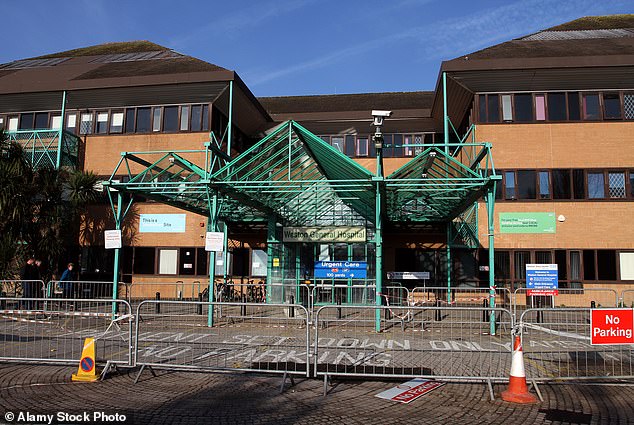 Weston General Hospital, in Weston-super-Mare, that shut to new patients has an ’emerging picture’ of staff with no symptoms testing positive for Covid-19

Somerset Live claims it saw a message reportedly sent to NHS staff in the South West region on Sunday, May 24.

The message, shared by an unnamed NHS worker, said testing of staff at Weston General, including workers without any symptoms, has revealed ’40 per cent as COVID-19 positive’.

And the newspaper claimed the leaked memo, which the NHS trust has yet to deny is false, said more than 64 patients have tested positive in the hospital, up from 30 patients at the beginning of last week.

An update from University Hospitals Bristol and Weston NHS Foundation Trust, which runs the hospital, revealed more on Tuesday evening.

Trust medical director Dr William Oldfield said they are in the process of testing all staff in clinical areas at the hospital who may have had some patient contact.

Read More:  Can u have chlamydia and test negative

‘There is an emerging picture of asymptomatic staff testing positive for the virus,’ he said.

HOW MANY NHS WORKERS HAVE COVID-19?

Of all people who are infected with the coronavirus, 80 per cent have only mild symptoms or none at all, according to data published by the World Health Organisation.

There have been various studies which have sampled groups of people to figure out how many are asymptomatic.

A recent study suggested thousands of NHS staff could be unknowingly infected with coronavirus without symptoms.

University of Cambridge academics took swabs of 1,200 workers at Addenbrooke’s Hospital in Cambridge over three weeks in April. Some 75 per cent of were women.

The researchers used the gold stand of testing – called PCR – which looks for genetic material of the virus on swab samples taken from the nose or mouth.

Workers were asked about any symptoms of COVID-19 and were divided into two groups.

But of the 1,032 staff members reporting fit for work because they did not have symptoms, three per cent tested positive for the infection.

Around 20 per cent of those who received a shock diagnosis reported no symptoms of the virus, which means they could have unknowingly spread the disease to patients.

They potentially transmitted the virus to co-workers, family members and patients, during the month of April.

If the results are applied to the 500,000 NHS frontline workers across Britain, the data suggests 15,000 may have tested positive for the killer infection last month.

But it is not known whether Cambridge is a particularly hard-hit region or if it has escaped lightly, meaning the rate of infection could be different elsewhere.

Researchers have now called for NHS workers to be tested every day for COVID-19, regardless of whether they have symptoms.

Dr Oldfield said members of staff who have tested positive have self-isolated in line with national guidance.

He said there are ‘appropriate levels’ of personal protective equipment (PPE) available and added that ‘there have been significant efforts to minimise unnecessary staff movements across the hospital’.

People who are infected with COVID-19 but show no symptoms could make up a significant proportion of COVID cases, research suggests.

One study of staff at Addenbrooke’s Hospital swabbed 1,000 NHS workers who were deemed fit to work, and found three per cent had COVID-19.

If applied to the 500,000 NHS frontline workers across Britain, the data suggests 15,000 may have tested positive for the killer infection in April, when the study was conducted.

Experts have called for NHS workers to be screened regularly in order to identify anyone carrying the virus without knowing.

Professor Charles Swanton, who works at the Francis Crick Institute, underlined the importance of screening healthcare workers for COVID-19 in an article published in the Lancet on April 15.

He said: ‘Increased testing capacity will enable all staff who are self-isolating unnecessarily to bolster a depleted workforce. Asymptomatic health care workers (HCWs) are an underappreciated potential source of infection and worthy of testing.’

Dr Oldfield said in the statement yesterday: ‘Testing for symptomatic staff and household contacts has been offered across the trust since the beginning of April.’

He confirmed there were ‘currently a high number of patients with coronavirus in the hospital’, who were being ‘appropriately segregated’, but did not clarify if this was the sole reason the hospital had shut.

Local MP, John Penrose, said the hospital was having a ‘deep clean’ after speaking to health chiefs.

He told MailOnline: ‘As I hope everyone would expect, I’ve been meeting local health chiefs to get to the bottom of this.

‘They say the hospital isn’t full and there are enough spare beds, but they’re worried about cross-infecting non-covid patients, so they want to stop new arrivals until they’ve deep-cleaned it and checked all the staff too.

‘They’re running tests which they hope will reveal the truth of it, so we should know more once the results come in.’ 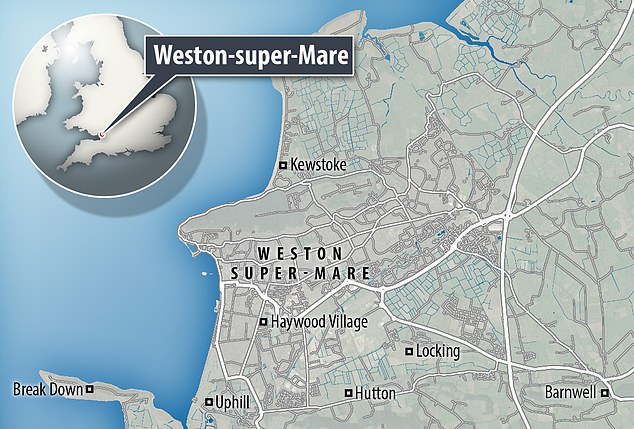 Weston-super-Mare is in Somerset, the South West. The region has been the least affected by the coronavirus so far 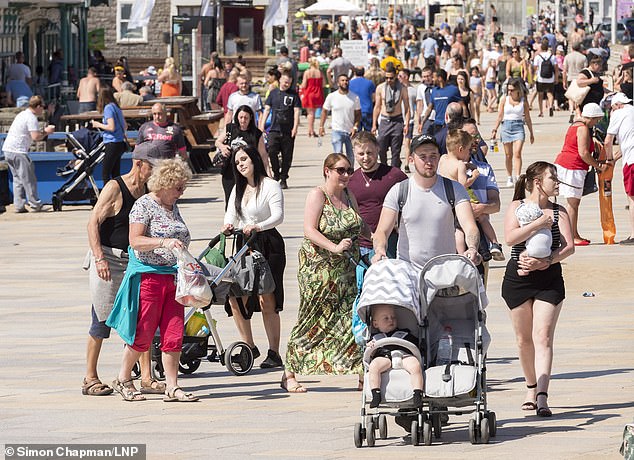 Angry residents say ‘it’s not rocket science’ – there has been an outbreak in Weston-super-Mare because crowds are unable to stay socially distanced at the beach. Pictured: The promenade on May 25 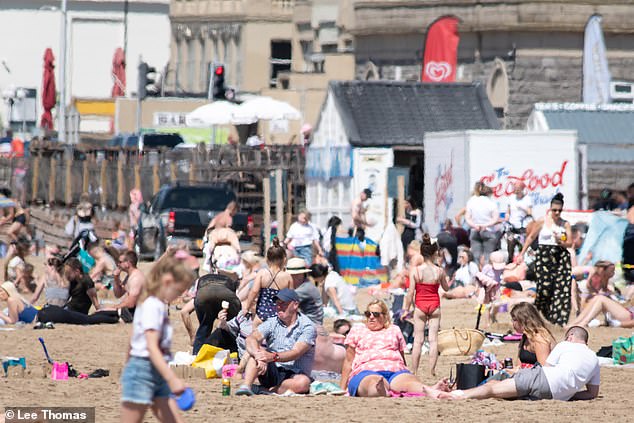 Mr Penrose said there was ‘no evidence to show if the outbreak is connected to visitors on the seafront’, after day-trippers were blamed for a surge in cases.

WORKER AT HOSPITAL DIED OF COVID-19 IN APRIL

An employee at Weston General Hospital, which has been closed to new patients due to a ‘high number of Covid-19 patients’, passed away on April 23.

Amarante Dias died after testing positive for Covid-19. It is not clear what his job role is or when he had been working at the hospital.

Dr William Oldfield, medical director at the University Hospitals Bristol and Weston NHS trust, said: ‘We are deeply saddened at losing Amarante Dias who was such a valued and much-loved colleague.

‘On behalf of everyone at University Hospitals Bristol and Weston NHS Foundation Trust, including our patients and the communities we serve, I would like to offer my sincerest condolences to his family.

‘Amarante will be greatly missed and we are ensuring that staff have access to support to help them at this difficult time.

‘We will not be commenting further and ask that everybody respects the privacy of the family at their request.’

The Weston Super Mare Association of Malayalees posted a tribute on social media: ‘Our deepest sympathy and prayers to you and your family, (Amarante Dias) will deeply be missed.’

People who live in Weston-super-Mare said it was clear tourists who flocked to beaches after the lockdown was loosened were contributing to spread of the virus.

The beaches in Somerset and elsewhere have been packed with tourists since Prime Minister Boris Johnson allowed people in England to travel as far as they like to enjoy unlimited exercise and sunbathing.

The South West region has so far experienced the fewest cases and deaths from COVID-19 in England.

University Hospitals Bristol and Weston trust (UHBW), which has confirmed 118 coronavirus deaths across its two hospitals.

But it is unclear how many of those happened at Weston General and its other hospital, Bristol Royal Infirmary (BRI).

Weston General said it was taking some patients on compassionate grounds,  including those with disabilities or to the maternity ward.

Yesterday it urged patients with appointments to not travel to the hospital, and has also set out rules on when people can visit amid the ‘temporary’ shutdown.

Dr Oldfield added that people needing care are currently being provided for in other settings as they work to reopen their A&E department ‘as soon as possible’.

He said: ‘Well-established arrangements are in place for any emergency referrals to Weston to go to other healthcare providers, new patients continue to have access to treatment and care in other appropriate healthcare settings in the area should they need it, and we are contacting patients who have planned appointments to discuss alternative arrangements.

‘We are continuing to take the necessary steps with the aim of reopening the A&E department and accepting new patients as soon as possible.’