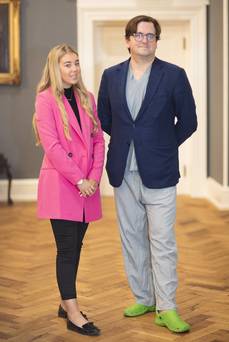 It was understood their beloved daughter Tammy had a minimal chance of walking again. Their world was turned upside down.

In their eyes, in the wake of a terrifying fall and devastating injuries, the home they created in Ballinahown, near Athlone in Co Westmeath, wouldn’t cut it for her anymore. They believed a new house would be best suited to their needs.

“I remember when she was laying on the ground after the fall,” Aidan recalls. “She said: ‘Daddy, I’m going to be in a wheelchair’.”

Tammy, now 17, had been riding horses for nine years. Falls happened before, but this one was different.

“I was going through my normal lesson and the horse fell. I fell over him and then I just went completely numb,” Tammy explains.

“My trainer came over to me and asked me if I could move, if I was alright.

“I said ‘no, I can’t feel anything’. I knew something was wrong when she told me to let go of my whip in my hands and I couldn’t release it. It was frozen in my left hand.

“I just knew straight away that something was wrong. The ambulance was called and they came down and they put my head in blocks to keep me stable and put me on a stretcher and I went to Tullamore.”

Tammy underwent an x-ray at Midland Regional Hospital, Tullamore. It showed she had broken a bone in her neck, her C5 vertebrae. It is one of the areas that sees the most trauma during accidents, but damage can lead to disability and paralysis.

She was rushed from Tullamore to the Mater Hospital to be treated by Marcus Timlin, director of the national spinal cord injuries unit.

Within 12 hours of her fall Tammy had undergone an MRI scan and was in surgery to repair the damage.

“Obviously for Tammy that is incredibly shocking and scary,” Mr Timlin says.

“She doesn’t know what is happening. All she will have seen for hours is sky and ceiling, immobilised on a board with a collar knowing she has fractured her spine and can’t move her arms and legs as well as she did before her injury.

Read More:  How to beat anxiety

“Our hope with patients like Tammy is that if we do an operation, and take the pressure off the spinal cord, it allows some hope of recovery.”

Her parents were filled with dread and worry. They saw little chance of recovery as they waited in the car outside, weighing up their options during the 12 hours Tammy was in theatre.

“We were in shock, completely shook,” Aidan says.

“When we got to the Mater, it was like a train. There was a team set up straight away with a psychiatrist, a physiotherapist, and people who would help. Everything was already in motion and it was one thing after another. Then she went to theatre.

“I had gone home to get a few bits and I had a pillow and a blanket from home in the car. We sat out in the car and the decisions were made. One of us was going to give up work and we were going to sell the home.

“The accident happened at 7.30pm. By 6am we had weighed up our options and decided what we were going to do.”

Mr Timlin was a little more hopeful. Approximately 50 patients are urgently rushed to the Mater Hospital every year after sustaining a spinal injury. He says the initial care given, and awareness of people who arrive to the scene of an accident, are critical factors in any recovery.

Two weeks before her fall, Tammy had taken a first aid lesson at her school, Athlone Community College. The class studied back injuries.

“I knew not to move as well, because we were told not to move someone with a back injury to prevent more damage. That instinct just kicked in,” she says.

Mr Timlin says this was crucial.

“She wouldn’t have been moved on the ground by people with some first aid knowledge and she was aware of that herself. That was important.

“What we are hoping for with a neck injury is that we can get them one or two motor levels better by doing surgery. That might mean the difference between raising your arms to the side, bending your elbows and having some grip strength. Each one is an improvement and can make the difference between being able to feed yourself or getting in and out of a wheelchair if you don’t have the use of your legs.

“Tammy had a burst fracture of the C5 vertebrae with an incomplete spinal cord injury. On the MRI scan, we could see there was bone within the spinal canal and damage to the spinal cord.

Eventually, Aidan and Angie were called inside as Tammy emerged from theatre.

“Her nickname for me is Bud,” Aidan explains.

“So she came up from surgery and all I could hear was ‘Bud, look’.”

Tammy was wiggling her toes.

The relief was immeasurable but her battle was not over. She would spend another three weeks in the Mater, before a short stint at home and almost two months at the National Rehabilitation Hospital in Dun Laoghaire.

She was told it could be two weeks before she could expect to be out of bed, however, within days she was trying to walk.

“The rate of progress from there was amazing,” Aidan says. “Every time I got out of bed I was seeing stars,” says Tammy.

“I kept fainting but kept saying I didn’t want to stay in bed any longer. I kept trying until I started getting stronger – taking a step, then two steps, and three and it progressed.

“Mam and Dad were holding me up by the arms. I could only take a few steps and then I’d have to be put in a wheelchair.

Read More:  Was given regarding high protein diet

“I don’t know (where the determination came from) but Marcus had done his job and I knew it was up to me to get out of the situation I was in.

“I’m very determined when it comes to schoolwork, sports or anything I like.

“I had my neck brace on for 12 weeks, so trying to sleep with that, or walk with that, was hard. I could only stay in one position and it is very uncomfortable.”

Tammy needed a second operation last January to stabilise her neck and has made a full physical recovery since.

When meeting Tammy, it is impossible to know that a bone in her neck has been reconstructed with a metal cage, plates and screws. There are no visible signs of the horror she endured. However, she finds it upsetting to talk about the accident and is reluctant to put herself into some physical challenges.

The family met Mr Timlin and staff at the Mater before Christmas. He reassured her that she was free to start horse riding again, or return to playing football in Athlone.

“Talking about the accident brings up bad memories,” she says. “I go to the gym and run on the treadmill or do weights but that’s all I am doing because I am scared.”

She insists horse riding again will be a step too far, to the relief of her parents, but as a committed centre back with Athlone GAA she is determined to take to the field in the New Year before sitting her Leaving Cert. She has abandoned plans to study accountancy and instead wants to become an occupational therapist.

“This has changed the way I look at things and I want to give something back.

“Marcus telling me I am okay and it (the metal cage) won’t move is reassuring. I don’t want to go back horse riding, I don’t want to take that risk again but I’ll go back to football.”

She smiles, “I think they need me.”