Texas 15-year-old dies of vaping-linked illness, becoming the youngest victim of the e-cigarette epidemic as US death toll rises to 57

A 15-year-old in Texas is now the youngest person in the US to die of the vaping-linked illness that’s claimed the lives of a total of 57 people nationwide, officials said Thursday.

As of Thursday, 2,602 people have been hospitalized with lung illnesses linked to e-cigarettes in every US state, the District of Columbia, Puerto Rico and the US Virgin Islands, according to the Centers for Disease Control and Prevention (CDC).

Most of the victims are male and under the age of 35, with ages of those who died ranging from 15 to 75.

Increases in the number of cases appear to have slowed, but the illnesses continue to be prevalent and severe. 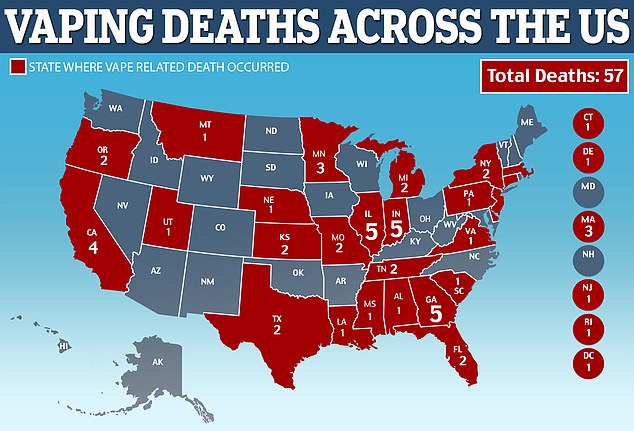 The CDC announced on Thursday that 2,602 people have fallen ill in every US state and 57 people have died in 27 states (red) and DC due to mysterious lung illnesses linked to vaping. There is one unconfirmed death in Texas.

The 57 deaths have been confirmed in 27 states and DC, with Georgia, Illinois and Indiana having the highest number of vaping deaths at five each.

According to the CDC, about 83 percent of people who’ve fallen ill reported vaping THC, the main psychoactive component in marijuana.

By comparison, a mere 13 percent have reported exclusive use of nicotine-containing products.

CDC officials say there are ‘confident’ that vitamin E acetate, a diluting agent used in many THC vaping products, is behind the illnesses.

It was detected in 48 of 51 samples of tissues of patients with – what is being called – EVALI (e-cigarette or vaping product use-associated lung illness).

‘It is clear that the outbreak represents a new phenomenon and not a recognition of a common syndrome that had evaded our attention.’

While vitamin E is safe as a vitamin pill or to use on the skin, inhaling oily droplets of it can be harmful.

It’s sticky and stays in the lungs, so much so that Dr James Pirkle of the CDC likened it to honey.

Scientists theorized that the oil might be coating the lungs, triggering inflammation and damage.

In fact, it causes burns that have been likened to those suffered by soldiers attacked with mustard gas during World War I.

Last week, the US Food and Drug Administration’s announced a ban on most flavored e-cigarettes in an effort to curb the rise of youth vaping.

Only two flavors, menthol and tobacco, are being sold in stores.

The CDC has not changed its warning against using these illegitimate products and continues to urge Americans who don’t use e-cigarettes not to start.

Although the agency says that smokers who have switched to vaping should not return to using combustible cigarettes, the CDC also advises vaping products should ‘never be used by youths, young adults or women who are pregnant.’