Hong Kong leader Carrie Lam on Saturday declared a virus emergency in the city of 7.3 million, extending school cancellations until Feb. 17 and canceling all official visits to mainland China.

Lam announced a package of measures aimed at limiting the Asian financial hub’s connections to mainland China. Flights and high speed train journeys between Hong Kong and the Chinese city of Wuhan will be halted, and annual official Lunar New Year celebrations for the city have been scrapped.

Hong Kong health authorities have confirmed five cases of the deadly coronavirus, all of which have been traced back to Wuhan, a city of 11 million where the virus was first detected. An additional 122 people in the Hong Kong are being treated for potentially having the disease, the health authorities said.

China has quarantined three cities in an effort to contain the disease’s spread ⁠— encompassing a total population of some 35 million people. Major tourist spots including Shanghai Disney are closing until further notice, and Starbucks and McDonalds announced temporary closures of their chains in the province of Hubei, which houses Wuhan.

The flu-like coronavirus, first identified on Dec. 31, has killed at least 41 people in China and infected more than 1,300 worldwide. Fears over the disease’s impact on the global economy sent stocks falling on Friday, with the Dow Jones Industrial Average closing down 170 points.

Read More:  Coronavirus: Tests 'could be picking up dead virus' 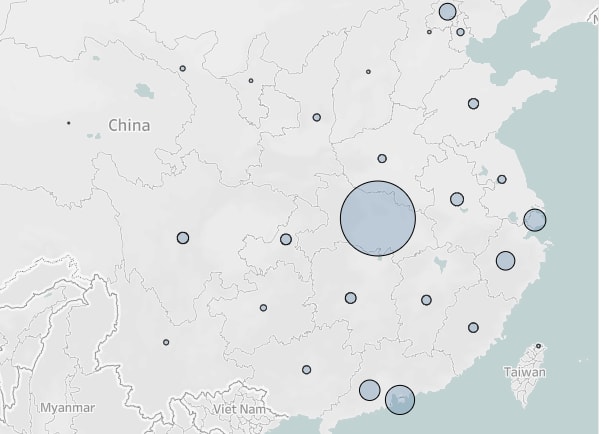 This map shows the latest spread of the coronavirus

The World Health Organization (WHO) has so far declined to declare the disease a global health emergency, saying it needs more data. The virus is currently spreading through human-to-human contact and in medical settings, the organization said.

Coronaviruses are a large family of viruses that tend to primarily affect animals, but can evolve and spread to humans. Symptoms for the strain currently moving around the globe include fever, coughing and shortness of breath, which can progress to pneumonia.

Australia confirmed its first four cases of the virus on Saturday and expects more, its health authorities said, as the country is a popular destination for Chinese tourists. The infected patients are three men who traveled to Australia from China ⁠— two who traveled from Wuhan to Sydney and one in Melbourne who had also been in Wuhan. All three, aged 53, 43 and 35, are reported to be in stable condition.

“There are other cases being tested each day, many of them are negative, but I wouldn’t be surprised if we had further confirmed cases,” Australian chief medical officer Brendan Murphy told press on Saturday.

On Friday, the U.S. Centers for Disease Control and Prevention confirmed the second U.S. case of coronavirus, a Chicago woman in her 60s who had traveled to Wuhan but is reported to be in stable condition at a hospital. There are currently 63 cases in the U.S. being monitored across 22 states.

“CDC believes the immediate risk to the U.S. public is low at this time, but the situation continues to evolve rapidly,” said Dr. Nancy Messonnier, director of the National Center for Immunization and Respiratory Diseases. She added that there are likely to be more cases in coming days and that “we have our best people working on this problem.”

Read More:  Emergency COVID-19 Vaccines May Cause Massive Side Effects

While the majority of confirmed coronavirus cases and deaths are in mainland China, the virus has also been identified in Japan, South Korea, Taiwan, Thailand, Vietnam, Singapore, Nepal, France, the U.S. and most recently Australia.

Chinese state media on Saturday announced the city of Wuhan will build a second hospital specifically designated to treat coronavirus patients, which staff say will be completed within six days.

Chinese health authorities are under strain as the volume of patients spilling into hospitals for treatment increases. A top health official in the Civil Affairs Department in Hubei made an appeal for more resources like masks and suits on Saturday.

“We are steadily pushing forward the disease control and prevention… but right now we are facing an extremely severe public health crisis,” the official, Yu Hinghai, told local press according to a translation by Reuters.