New drug gives hope in fight against one of the deadliest breast cancers… but will it get the green light in time to save these women?

By Jo Macfarlane for The Mail on Sunday

In January, Nicola Tracey sat down with her two young daughters and tried to do the impossible – to find the right words to tell them she had only months left to live.

The aggressive breast cancer she had been diagnosed with in July 2018 had returned with a vengeance, and had spread to her brain and lungs.

Following a seizure, doctors told the 41-year-old, from Bristol, the heartbreaking truth: that she was finally running out of time and treatment options.

After everything Nicola has been through since her diagnosis – the endless rounds of chemotherapy, a mastectomy, losing her hair three times and the exhausting side effects of treatment – this was undoubtedly the worst.

‘There were so many tears,’ she says. ‘It was horrible. Absolutely devastating. What do you say to your children in that situation?

‘I told them I was really poorly. That I might not have that long. The doctors said it was ‘in the low number of months’. 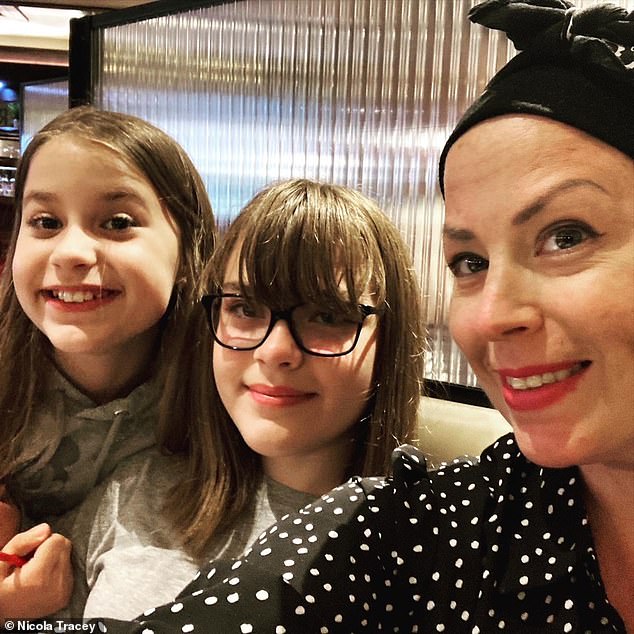 In January, Nicola Tracey sat down with her two young daughters and tried to do the impossible – to find the right words to tell them she had only months left to live. The aggressive breast cancer she had been diagnosed with in July 2018 had returned with a vengeance, and had spread to her brain and lungs. Above: Nicola with daughters Charlotte (left), 10, and Jessica, 12

‘The truth is, I don’t know how long I still have – it feels like a ticking time-bomb. To have a few extra months just to hug my children for longer – to celebrate another birthday, one more Christmas – would be huge.’

Yet there is, for the first time, a lifeline for women like Nicola who are diagnosed with triple-negative breast cancer.

This form of the disease hits about 8,000 women in the UK each year – about 15 per cent of all breast cancers.

And it is the most aggressive and difficult to treat. While breast cancer is seen mainly in women after the age of 50, triple-negative breast cancers are often found in younger, pre-menopausal women.

And – purely because of their age – many have young families. Nicola’s daughters are just ten and 12.

Once the cancer spreads, the prognosis is bleak – most patients do not survive beyond 12 to 18 months.

About 1,650 women die of metastatic triple-negative breast cancer every year, accounting for roughly one in ten breast cancer deaths.

There have been few innovations to treat it, simply because doctors don’t really know what drives it.

Most breast cancers are fuelled by hormones, which means there are specific receptors on cancer cells that can be targeted or switched off using drugs such as Herceptin or Kadcyla, which have revolutionised survival rates.

For triple-negative disease, none of these receptors are present. But a new drug, Trodelvy, could buy these women more time.

It’s not a cure, but trials have shown that the £200,000-a-year therapy, which seeks out and selectively destroys cancer cells, can double survival rates and shrink tumours, giving patients longer life with fewer debilitating symptoms.

It is also particularly effective in women such as Nicola who have secondary tumours in the brain, which are more likely with triple-negative disease.

There’s one problem: it isn’t yet licensed for use in the UK, despite being available in America since last year and despite assurances from the Government that drugs such as these would be approved far quicker after Brexit.

A decision by the UK regulator, the Medicines and Healthcare Products Regulatory Agency (MHRA), to approve the drug is expected ‘within weeks’, insiders say.

But NHS funding watchdog, the National Institute for Health and Care Excellence (NICE), has yet to negotiate with the drug’s US manufacturer, Gilead, which means that women in the UK may not have access to it until well into 2022.

By that time, campaigners point out, most women living today with metastatic triple-negative disease will already be dead.

It leaves patients in an agonising situation, knowing there is a drug that could buy them precious time with their children or loved ones, but that it is just out of reach.

Today, in The Mail on Sunday, charity Breast Cancer Now and patient advocacy group MetUp UK are calling for current NHS patients to get early access to Trodelvy.

They are appealing to Gilead to make the drug available, for free, as soon as it is approved by MHRA to bridge the gap until the NICE cost appraisal is completed.

The charity’s chief executive, Baroness Delyth Morgan, said: ‘Women with incurable secondary breast cancer live with fear and uncertainty around when this devastating disease will cut their lives short; for those with triple-negative disease, shorter prognoses and more limited treatment options make the outlook even bleaker.

‘For some of these women, Trodelvy offers hope – and they don’t have time to wait. The solution is clear – an interim access agreement must see women with triple-negative secondary breast cancer being offered Trodelvy following its licensing and ahead of a decision being made about its routine use on the NHS.

‘But, crucially, this can only happen if Gilead provides the drug free of charge on the NHS on a short-term basis.’

This would mean ‘everything’ to women living with the disease, according to MetUp UK campaigner Philippa Hetherington.

‘Women with metastatic triple-negative disease don’t cost the NHS much,’ she says.

‘The drugs they’re given are largely old and, because of that, cheap.

‘And they die quickly. Trodelvy is the first new drug that’s come along which does require a bit more investment, but I’d say that’s not unreasonable.

Read More:  Medical News Today: Catnip: What do we know about the feline drug?

‘It disproportionately affects young women who should have decades left to live. It could buy them a few more years with their children, and I’d hope people would consider that worth the money.’ 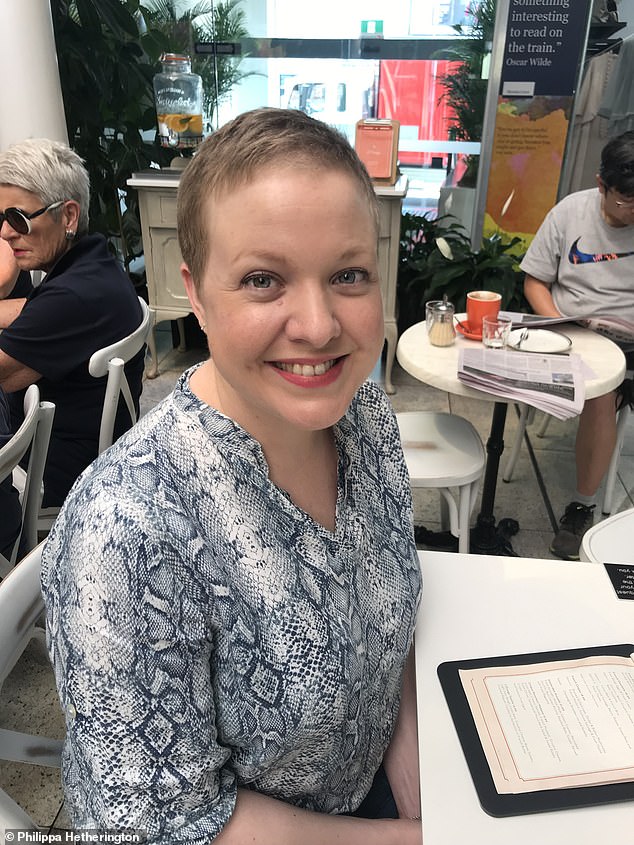 A new drug, Trodelvy, could give women with metastatic triple-negative breast cancer more time. Above: Philipa Heatherington was diagnosed with breast cancer in March 2019 after finding a bright pink mark on her left breast. She later received news the caner had become triple-negative

The 37-year-old, a lecturer in Russian history at University College London, has a personal stake in this campaign.

She was diagnosed with breast cancer in March 2019 after finding a bright pink mark on her left breast.

A biopsy found the tumour was originally hormone-dependent, like 80 per cent of breast cancers, which meant there were a variety of treatments available and a good prognosis.

She had six rounds of chemotherapy, a mastectomy and radiotherapy to the chest wall to mop up any remaining cancer cells.

She was also advised to effectively say goodbye to her fertility by taking a drug to switch off oestrogen production, because it could cause the cancer to return.

But in November, a scan found cancerous nodules in her lungs and lymph nodes. The worst news, however, was that the cancer had become triple-negative.

Philippa, who lives in London with her partner, says: ‘When we thought it was my original cancer coming back, my oncologist said it was very treatable and there were treatments which would last ‘years and years’. I clung to those words.

‘But when we discovered it had mutated, I Googled my prospects and saw the 12- to 18-month figure. At that point, I was 36. It felt – it still feels – incredibly unfair.’

Like Nicola, Philippa’s cancer had spread to her brain. She has had brain radiotherapy, a chemotherapy combination of the drugs gemcitabine and carboplatin, and is now on another drug, paclitaxel.

She says: ‘Statistically it’s only likely to work for six months or so – it’s a case of kicking the can down the road, buying more time.

‘So a treatment like Trodelvy is everything. I want to finish the book I’m writing on women and migration in Imperial Russia, travel to see my family in Australia, which I haven’t been able to do throughout Covid, and spend more time with my partner.’

At the moment there are limited options to treat women with later-stage triple-negative breast cancer.

Once it returns, they are given either chemotherapy or – if their tumours test positive for a marker called PD-L1 – they can have chemotherapy in combination with an immunotherapy treatment called atezolizumab.

This boosts the immune system’s ability to kill tumour cells, and can increase overall survival by about ten months.

Once this stops working, they can be given further chemotherapy, but it becomes harder to find one that works. Women at this point are often given a prognosis of just six months.

But Trodelvy is one of a new breed of cancer drugs, called an antibody drug conjugate, which combines two compounds and works in a slightly different way.

One, an antibody, attaches to a protein found on the surface of about 90 per cent of triple-negative cancer cells. It then releases a chemotherapy drug into the cell which stops it multiplying.

This is highly effective because, by targeting the cancer cells specifically, and not the healthy, surrounding tissue, a higher chemo dose can be used.

It is given as an intravenous infusion in hospital twice during a 21-day cycle.

In a recent trial of 468 patients whose cancer had spread, those given Trodelvy had ‘substantially better’ outcomes than those given standard chemotherapy.

It took six months before the cancer started growing again, compared with two months for those on chemo, and survival doubled from six months to 12.

Dr Peter Schmid, professor of cancer medicine at the Barts Cancer Centre and one of the researchers in the Trodelvy trial, says: ‘Is it the wonder drug to solve all problems?

‘Of course not. But it will buy patients precious time, improves survival and gives patients so much hope.

‘Six months extra is just an average – some might get another two years. It’s critical for women to get access to this treatment very soon.’

He adds: ‘It makes no difference whether you’re 30 or 70 and you have cancer – life is precious.

But the impact on families can be more dramatic. Every six months is being there for another birthday, another school year, another Christmas.’

Nicola knows this only too well. Her children, Jessica, 12, and ten-year-old Charlie, would give anything to have their mother around for longer. She says: ‘My main focus is the girls and being here for them.’

Wendy Broadley, 55, from Burwell, Cambridgeshire, also had her hormone-positive breast cancer turn into triple-negative disease when it returned in 2018.

By that stage it had spread into her bones and there was a further lump in her breast.

She has been treated with chemotherapy and, like Nicola, was eligible for immunotherapy when it became available last year. But the chemo made her so ill she had to stop.

Wendy and her husband Chris have four children living with them, aged between 16 and 23, from previous relationships.

She says: ‘I’m running out of options. There’s disease in my spine and I have nerve damage in my toes, headaches and mouth ulcers. I constantly live with the fear of when it will spread further.’

She adds: ‘I would love to see my boys grow up, and be a granny. I want to grow old with my husband and continue to live my life to the full.’

It is understood NHS England is open to making an arrangement with Gilead to provide Trodelvy for free, immediately following MHRA approval, in order to bridge the gap until the NICE funding decision.

This is not unusual – in May, a deal was made with AstraZeneca to make lung cancer drug osimertinib available to patients prior to its NICE appraisal being finalised.

Breast Cancer Now has launched a petition calling on Gilead to ‘do the right thing’ and reach an agreement with NHS England to make Trodelvy available as soon as possible. Mail on Sunday readers are urged to sign it.