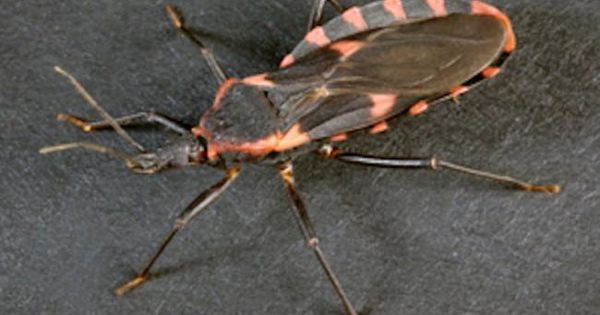 Unless you are from Texas or Latin America, you may never have heard of the deadly Triatomine insect, known as the “kissing” bug, which transmits Chagas disease. The bug visits people while they sleep, often crawling on their face. The bug can infect through bites. More often, the bug’s infected poop is accidentally rubbed into your eyes or mouth, causing infection.

A kissing bug was recently identified as having bitten a Delaware girl’s face last year. The child’s parents were concerned and ultimately the insect was tested at the CDC and found to not be carrying the parasite Trypanosoma cruzi, which causes the infections. The girl did not become ill.

Chagas is endemic in Latin America, where up to 12 million people might be infected. A third of those people who are infected later develop life-threatening heart complication. Chagas is a major cause of congestive heart failure and cardiac deaths in Latin America.

In the U.S., most people with Chagas likely became infected when they were children and lived in Latin America. Like Lyme, infection from Chagas is often not recognized, especially as the disease can remain silent for years. Northern Virginia was the first place in the US where a mother was found to have passed the infection to her baby during pregnancy, although that is common elsewhere. Dr. Rachel Marcus, a cardiologist, gave up her private practice to focus on Chagas, especially among the Bolivian immigrants to the region, describing Northern Virginia as possibly “ground zero” for Chagas disease in the US. Bolivia leads the world with the highest rate of Chagas.

As I noted in 2015, “in the US, we don’t often think of Chagas. Even as an Infectious Disease physician, I’ve never treated anyone with it, and it is not on my radar. So when a physician sees a patient who may have come to the U.S. as a child, and now has diabetes and hypertension, they are likely to attribute heart disease to that and not look for infection.”

Most cases in the US were detected by screening of blood donations, with one in 1 in every 27,500 donors found to be infected according to CDC. According to the CDC, there are an estimated 30,000 cases of Chagas in the U.S. This is likely to be an underestimate as Chagas is a reportable disease in only seven states.

But a more important barrier to diagnosis and treatment is societal. Many patients lack health insurance, so delay seeking any care. Others face language or literacy barriers. And still others are undocumented immigrants who fear deportation.

Cultural barriers also complicate diagnosis. As with tuberculosis, patients are reluctant to come forward because Chagas also carries social stigma, being linked as a marker of poor living conditions.

There is growing recognition of locally acquired (autochthonous) Chagas infection, particularly in southern Texas. For some years, there has been concern that climate change will drive the Triatomine bugs further north into the US.

While most Chagas remains asymptomatic, 20%–30% of those infected develop cardiac or GI complications which can be fatal. It is an “important cause of heart failure, stroke, arrhythmia, and sudden death” according to the American Heart Association.

Prevention methods are old-fashioned and limited, given growing levels of poverty. The best prevention is keeping the bugs out of homes by having intact walls, floors, and ceilings—which many people can’t afford to do. Bednets are helpful. So is increased surveillance, and screening pregnant women and high-risk populations at risk of the disease, as well as educating physicians and health care workers better about the problem.

It will take a far-reaching, coordinated effort to control this disease in the U.S. by bolstering public health infrastructure and access to health care. Both are worth doing as the disease can be so devastating to those it infects.