Researchers found high levels of tau, a protein linked to brain diseases, in former athletes with a history of concussion.

Twelve of the 22 Canadian sportsmen studied had tau levels higher than a healthy person should in their cerebrospinal fluid, but below the threshold for Alzheimer’s or chronic traumatic encephalopathy (CTE), a brain disease caused by repetitive hits to the head.

The players with high tau levels also fared worse on tests related to attention span, organizing, planning and prioritizing, with scores of 46 compared to those with normal tau levels, who scored around 62.

The study was small, and the team at the University of Toronto only saw spikes in ‘total tau’, which is linked to general wear-and-tear, rather than ‘phosphorylated tau’, the kind specifically tied to neurodegenerative diseases.

But Dr Michael Alosco, a lead researcher on Boston University’s pioneering CTE team who was not involved in this study, said it may be that total tau is an important factor, since this is the second study in recent months to find high total tau levels in former players. 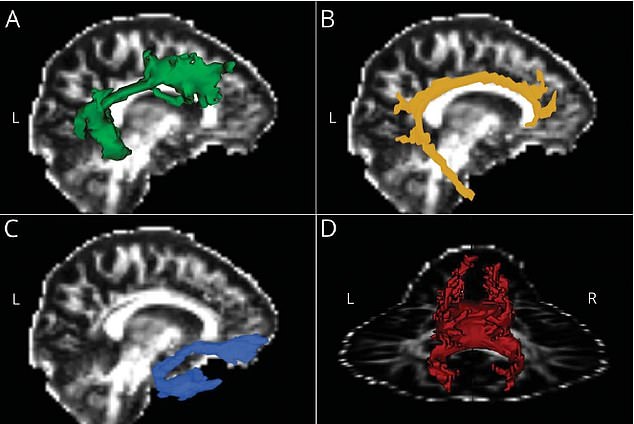 Twelve of the 22 Canadian sportsmen studied had tau levels higher than a healthy person should in their cerebrospinal fluid, but below the threshold for Alzheimer’s or CTE

‘White matter injury seems to be continuing to be shown in this population,’ Dr Alosco told DailyMail.com.

‘It could be that these athletes might not be sensitive to CTE. But I think total tau has been a relatively consistent finding in this field. It could be a potential supportive biomarker to indicate the presence of an injury.’

The Toronto study has some clear limitations.

It is very small, the players were all men, and they came from a variety of fields (12 played in the Canadian Football League, nine were hockey players and one was a snowboarder), meaning their experiences of head injury are very different.

But the fact that these findings echo another paper published last month is significant; every little chip away at this opaque subject gets us closer to understanding the nuances of this devastating but little-understood condition.

CTE was discovered in 2002 by Dr Bennet Omalu, after decades of football players, boxers and soldiers developing symptoms of aggression, memory loss, and suicidal tendencies.

Now, we know that repeated hits to the head appear to set off this condition, which cannot be reversed.

But our understanding of CTE is still thin, despite a growing swell of research, funding, and demand for answers.

To this date, CTE can still only be diagnosed in autopsy – as it was in former NFL players Aaron Hernandez, Junior Seau and Dave Duerson, all of whom committed suicide after reaching the height of their field.

‘Previous research has shown a link between former professional athletes who suffer multiple concussions and a diagnosis of CTE after death, however we wanted to find a marker of CTE that can be measured while someone is still alive and then see if it related to loss of brain function,’ said study author Maria Carmela Tartaglia, MD, FRCPC, of the University of Toronto in Canada and a member of the American Academy of Neurology.

‘Tau has been linked to a higher risk of CTE in the past and our study found higher levels of this protein in the cerebrospinal fluid of some of the former athletes.’

Dr Tartaglia added: ‘The findings support the idea that multiple concussions or head impacts put some people at risk of developing neurodegeneration which is the progressive loss of nerve cells, and possibly CTE, and this may be detected by measuring cerebrospinal fluid tau.

‘It also highlights the importance of finding a biomarker of CTE that can be measured while someone is alive, since currently a CTE diagnosis can only be determined in an autopsy, and not all players who suffered multiple concussions had elevated tau.’