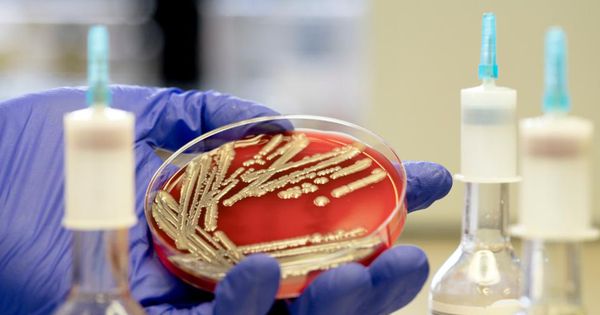 When you put someone else’s poop in your intestines, what could possibly go wrong? Well, death, for one thing.

A death is the reason why the U.S. Food and Drug Administration (FDA) has just issued a warning about fecal transplants or FMT, which stands for fecal microbiota for transplantation.

If you are wondering what a fecal transplant is, here’s the poop. Dictionary.com defines fecal as “of, relating to, or being feces.” A fecal transplant is when you take poop or the contents of poop from one person and put it in another person. This is usually not done for entertainment purposes, but rather to transfer one person’s intestinal microorganisms to another person. That’s why the term microbiota is sometimes included. No matter how clean you may think you may be, you’ve got a poop-load of microrgamisms in your gastrointestinal tract. Actually, it’s more than a poop-load. It’s a city-load. This city is called your gut microbiota or microbiome.

This city situation has drawn increasing interest in recent years. Your microbiome may play a number of different roles in helping maintain your health if the right combination of microrganisms are present. Conversely, the wrong combinations of microorganisms can wreak havoc. For example, Clostridium difficile is a very poopy bacteria. If this bacteria invades and proliferates in your intestines, it can lead to very bad diarrhea and a very bad and even life-threatening infection. This bacteria also tends to be resistant to many different antibiotics, which is one reason why doctors may use fecal transplants to combat difficult to treat C. difficile infections. The thought is that a fecal sample from someone with a healthy microbiome will provide good bacteria that can grow, out-compete, and overcome the C. difficile. For more information on this treatment for C. difficile, you can read my previous article in Forbes and watch this Emory University video:

Perhaps the best quote from the Emory video is Colleen Kraft, MD, an Associate Professor of Medicine at the Emory University School of Medicine, saying, “the fecal transplant does sound gross, I’ll give you that.”

The FDA is now warning about something else a fecal transplant could give you, if you are not careful. The theme song for the television show The Facts of Life went, “You take the good, you take the bad, you take them both and there you have the facts of life, the facts of life.” This song was not about fecal transplants. But the facts of fecal transplants are that if a poop donor has bad bacteria, such bacteria can go along with the good bacteria in the fecal transplant to the recipient as well. According to the FDA announcement, a donor’s stool had an antibiotic bacteria called extended-spectrum beta-lactamase (ESBL)-producing Escherichia coli (E.coli). ESBL is an enzyme that some bacteria can produce to deactivate certain antibiotics. Stool transplants from this donor went to two adults who had weakened immune system. Both recipients ended up getting this bad bacteria. One of the recipients ended up dying from an ESBL-producing E. coli infection.

Essentially, these fecal transplants were dung wrong. No one had tested the donor or the donor’s stool for ESBL E.coli before the transplants had occurred. After the recipients were found to have ESBL E. coli infections, testing of stored stool preparations from the donor revealed ESBL-producing E. coli that was identical to that found in the two recipients.

That’s why the FDA is urging anyone who wants to perform a fecal transplant to thoroughly screen any potential donors. In other words, don’t just take bleep from anyone. Make sure that any donors don’t have risk factors for having multi-drug resistant organisms (MDROs) or microorganisms that are resistant to different antibiotics. Screen all potential donors’ stool for MDRO’s before using their bleep for transplants.

If you are considering getting a fecal transplant, be aware of the risks and dangers. Don’t just plop in anywhere to get one. Check to see that the person handling the transplant has the proper training and experience. Proper training means that the person should be a real medical doctor. Make sure that you are getting it for the right scientifically-supported reasons such as a C. difficile infection that is not going away despite antibiotic treatment. Don’t let a person blow steam up you know where and give you an FMT for other reasons that are not supported by science.

These warnings are becoming increasingly relevant because there have been movements to use fecal transplants to treat a wider range of conditions. People have used FMTs to treat ulcerative colitis and are studying the possible use of FMT for autism. As I have written before for Forbes, studies have suggested that your microbiome may play a role in weight control and that fecal transplants may be future treatments for obesity. This has led to increased interest in poop and even the establishment of stool banks as shown in this Vice video:

If you go to a stool bank looking to buy furniture or withdraw some money, you will be in for a surprise.

These movements mean that more and more hucksters and scam artists may be literally trying to sell bleep to you. A Google search reveals a number of doctors, naturopaths, chiropractors, and self-declared health professionals making all kinds of claims about fecal transplants, including using them to treat eczema, asthma, multiple sclerosis, depression, and a range of various autoimmune diseases, despite the lack of scientific evidence supporting the use of FMTs for such indications. Since poop is “natural” and doesn’t involve drugs, the FDA doesn’t really regulate fecal transplants and what people are claiming about them. This means that people can basically pull anything out of their or others’ rear ends when it comes to FMTs. So, when listening to claims about fecal transplants, watch your back, because you don’t want more trouble in the end.